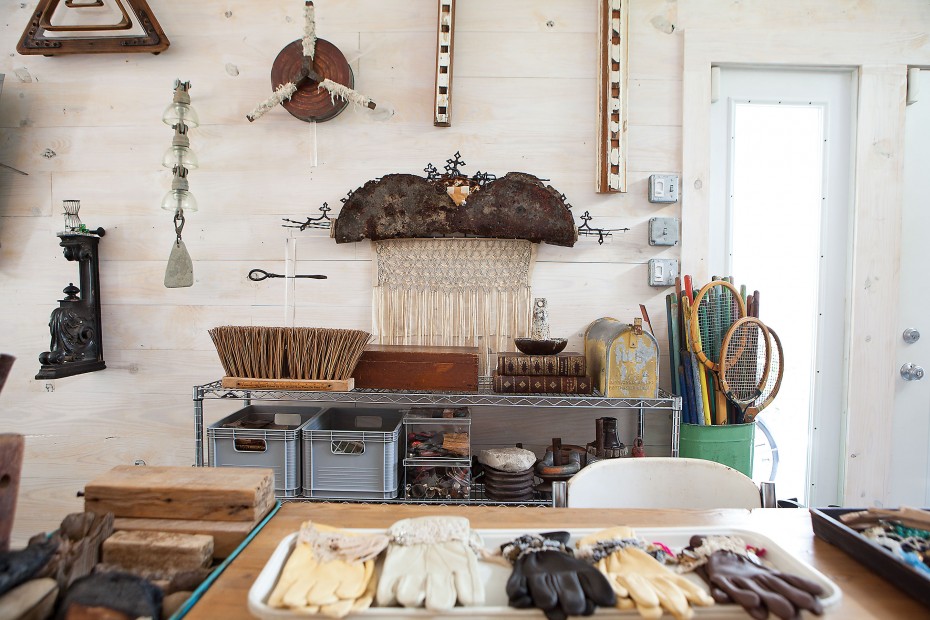 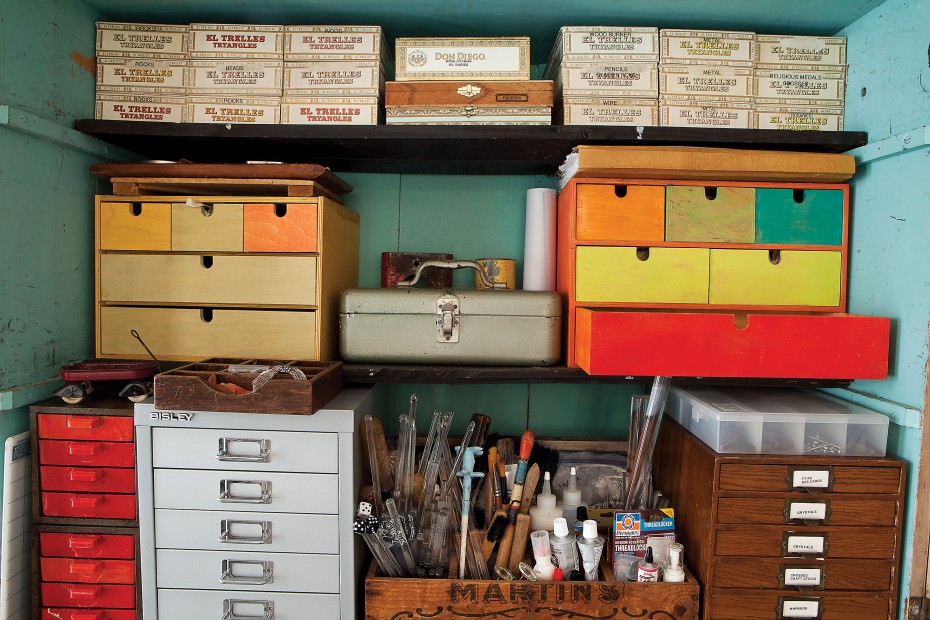 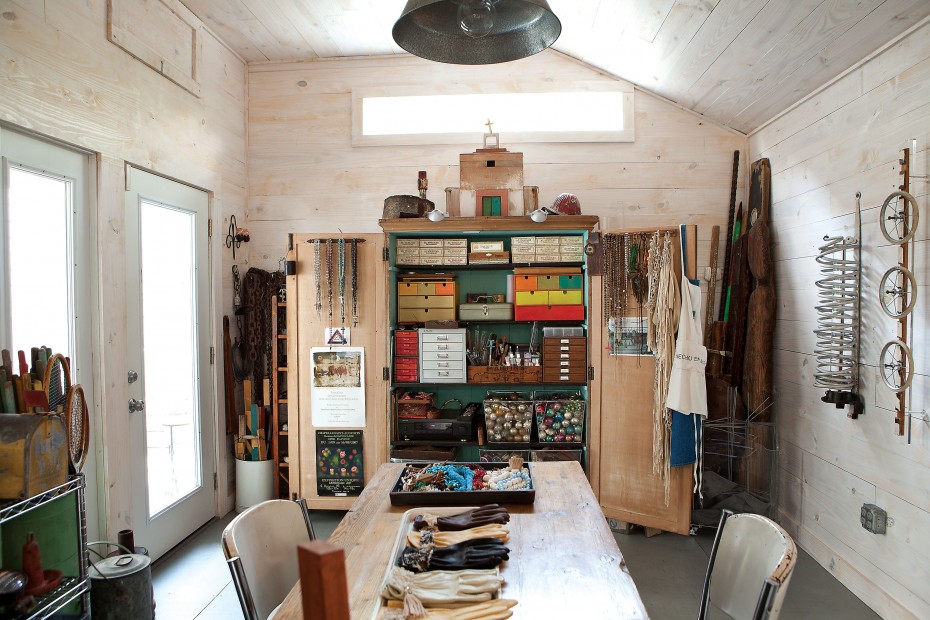 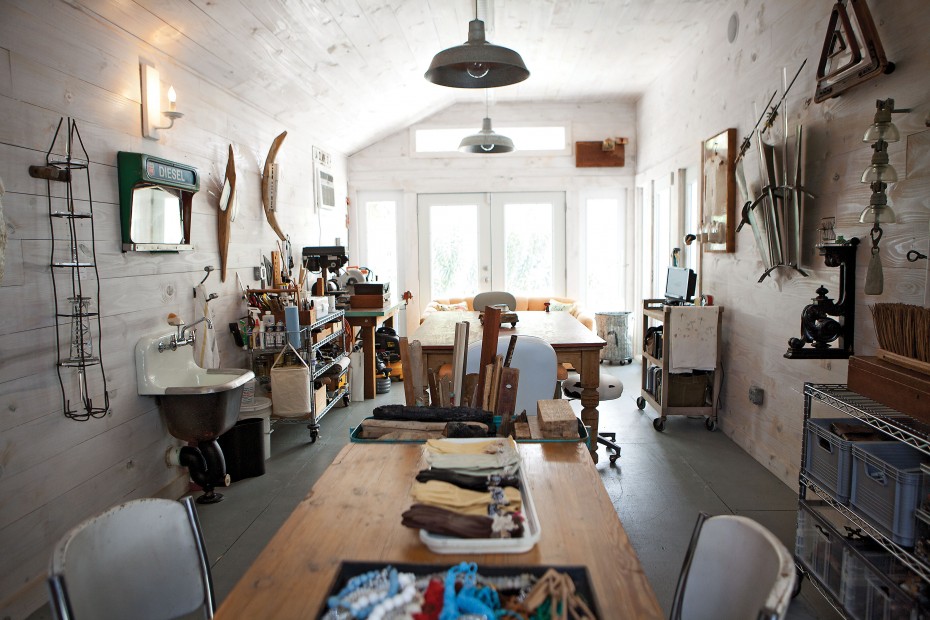 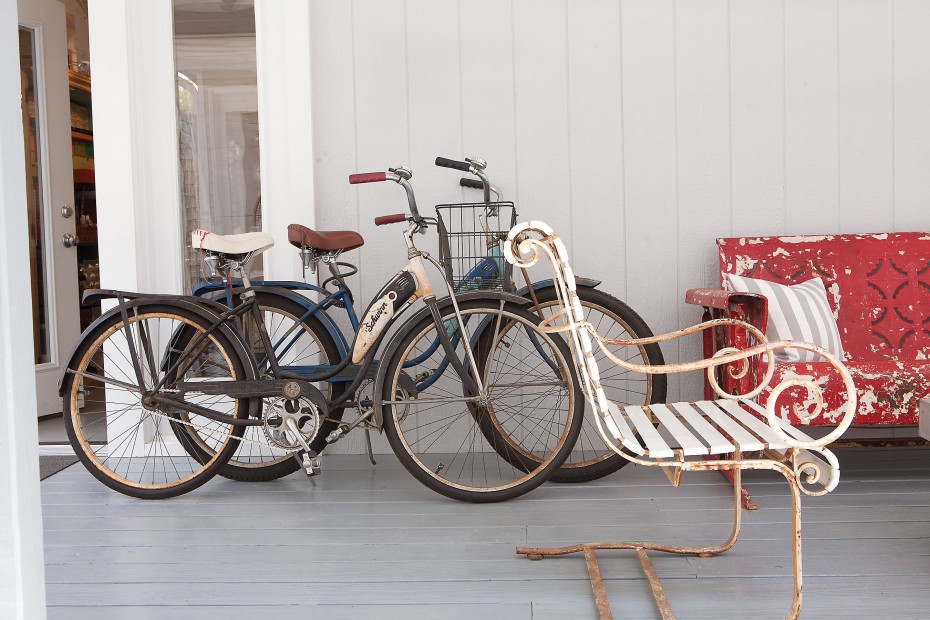 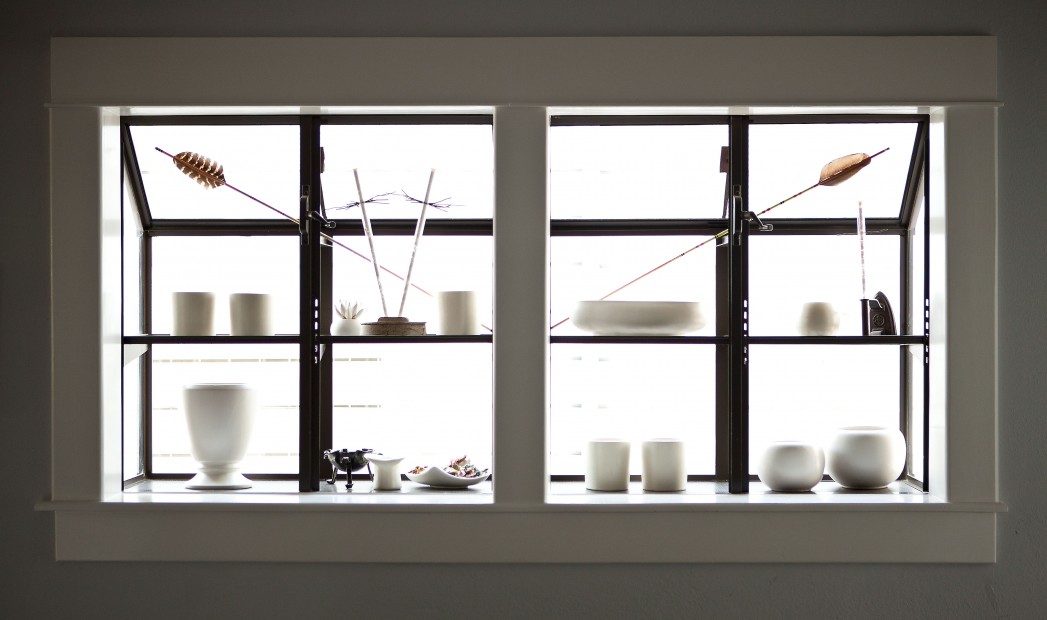 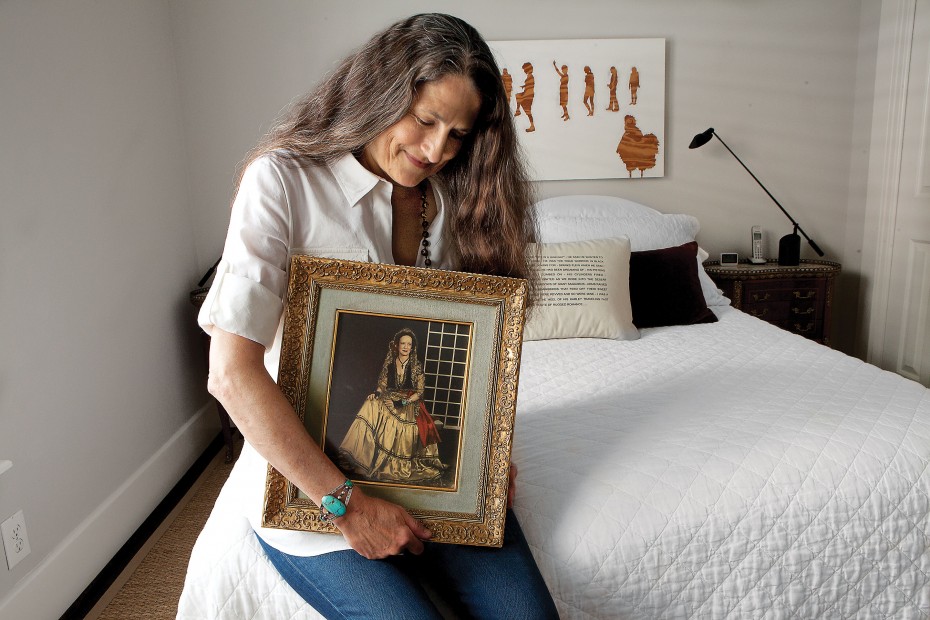 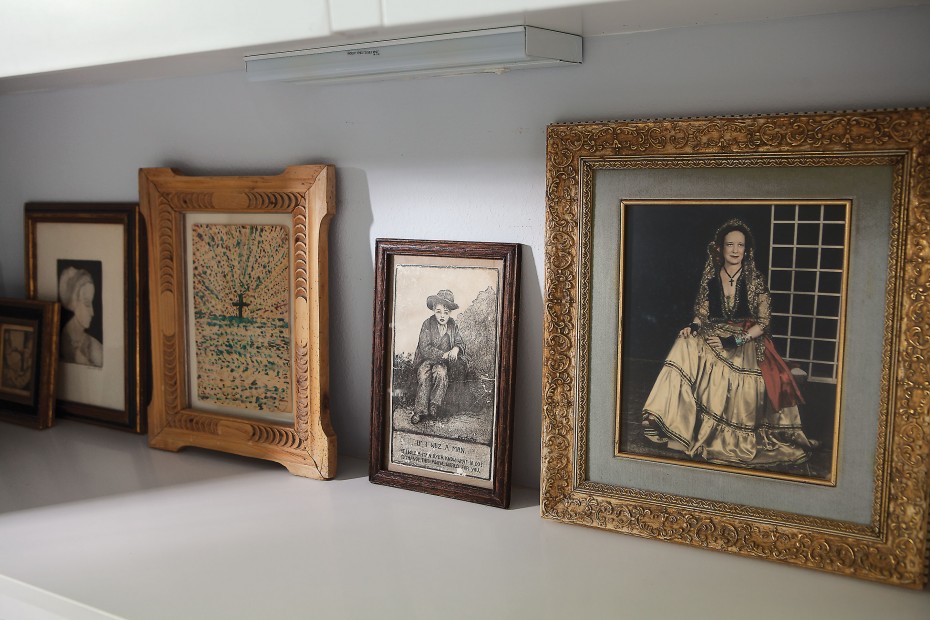 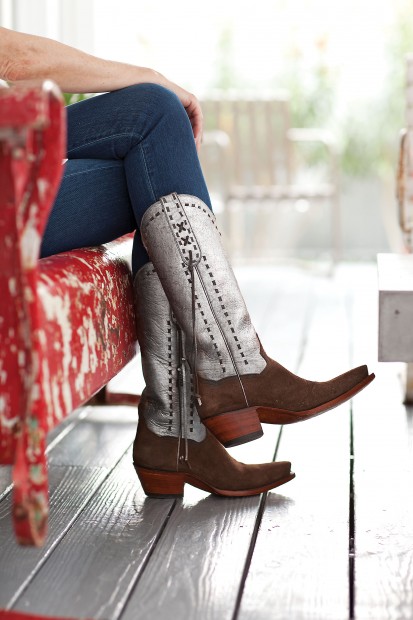 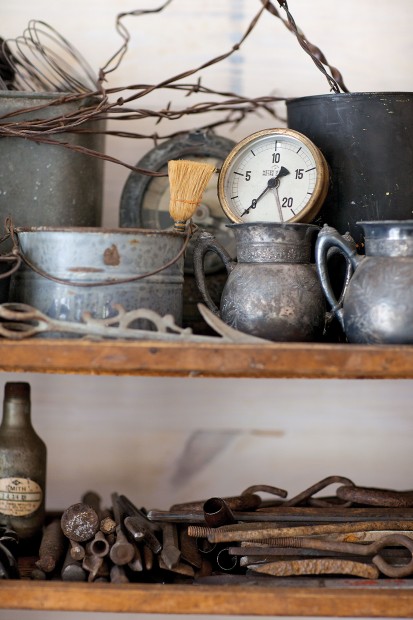 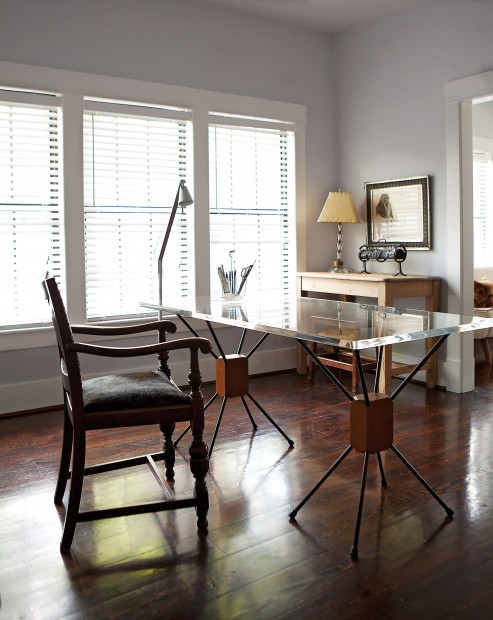 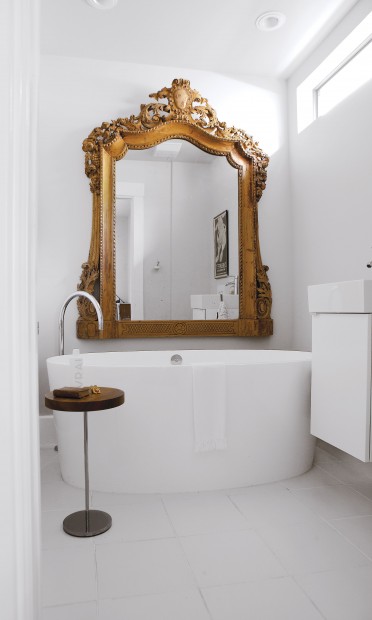 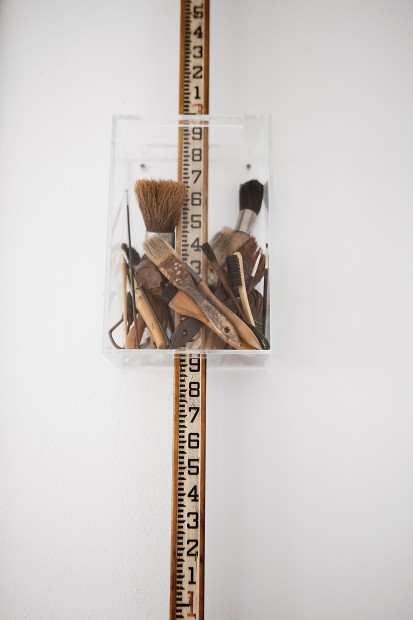 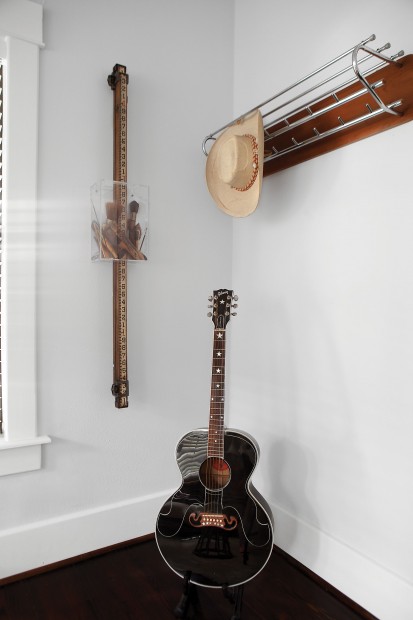 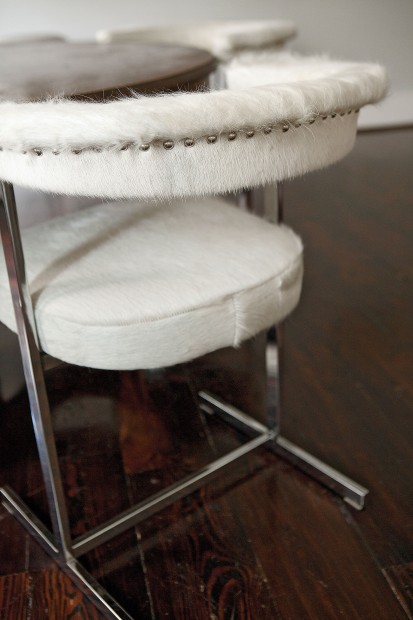 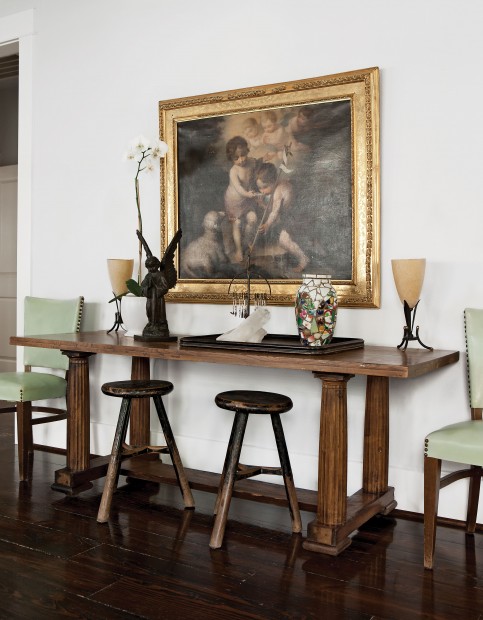 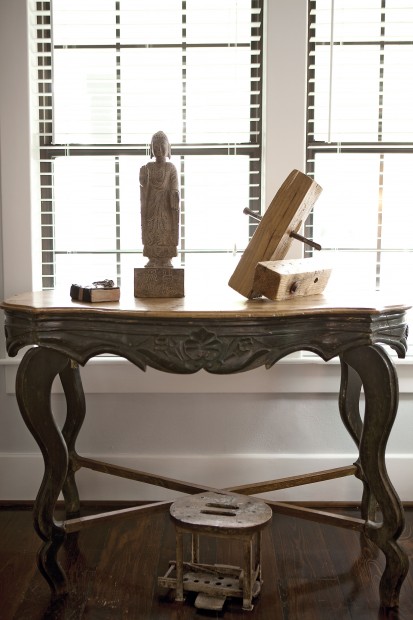 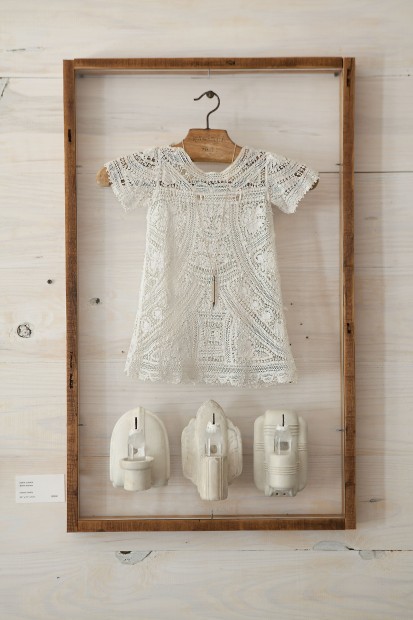 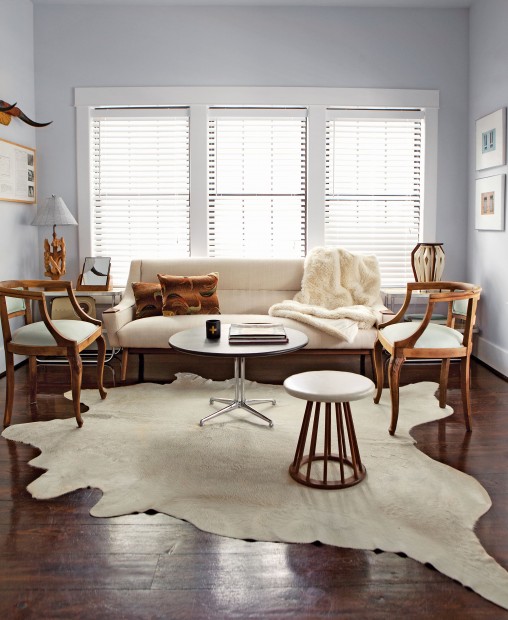 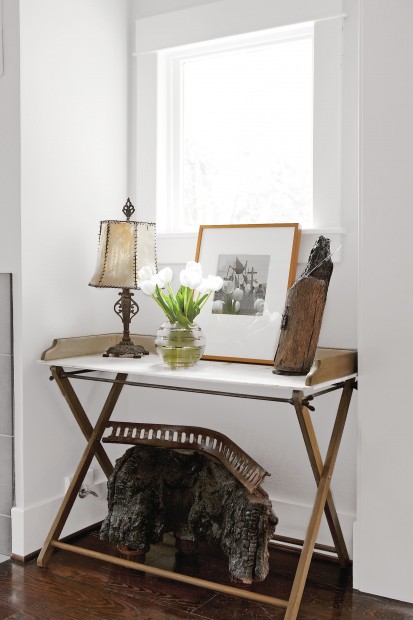 A pedigreed 1917 bungalow, refreshed for the 21st century, is filled with reclaimed treasures (including the owner’s own art), all imbued with the perfume of the past. Around every airy corner is a sculpture, a painting, an assemblage or furnishings that represent a delightful moment of sleuthing. Assiduously and lovingly culled from locales as far-flung as Paris, Rio, West Texas and, closer to home, Montrose and Heights antique and junk shops, this dwelling serves as a testament to the talismanic power carried by objects across time, and the exquisite mystery that a piece of art can hold.

Cue Claire Cusack, a  Houston artist who has been honing her minimal craft of assemblage for more than 20 years. She’s one of the stalwarts and stars of galleristFranny Koelsch’s stable. The pair met years ago when Koelsch was a high school student and worked part-time at Cotton Club, which Cusack helped manage. Cusack first became known for her sculptures of crosses that combined the sublime and polished with the rustic and authentic. Crystal shards encircled by rough-hewn bundles of barbed wire and charred chunks of campfire wood pierced by a perfect bolt of glass are among the memorable combinations.

Prior to becoming an artist, Cusack worked in the fashionable ranks of some of Houston’s most forward retailers. Besides the aforementioned Cotton Club, she also did stints in buying and management for Tootsies (her expertise: women’s European sportswear) and for Barneys New York, where she managed and also merchandised the former Houston Galleria store. While the art world won out, her foray into fashion is reflected in her enduring, iconoclastic style, which may find her switching out an impeccable pair of Prada sandals for striking Rocketbuster boots from one of the collections she lovingly tends and often wears.

Then there’s her lineage. Her mother, Barbara Hill, is a Houston-based designer, protégé of Dominique de Menil, and early art dealer who championed talents ranging from Donald Judd to Sol LeWitt; she was known for cutting-edge installations. Segueing into the design world, her celebrated projects included theDwell-featured interiors of the Row development in the Heights and, most famously, her own house in Marfa, which appeared in The New York Times. It also captured the eye ofNate Berkus and is recorded in his book The Things That Matter. Hill’s design point of view has definitley been inherited by Cusack, who also gravitates to the pared-down, reductive aesthetic that pervades this bungalow.

How did she and the house meet? Looking for a life change after her husband, Tim McGlashen (musician/frontsman for The Buddhacrush), passed away, she sought out a new scene and began searching for a classic Montrose bungalow. This one was love at first sight, not because of its handsome interiors (pristinely restored and updated by the previous owner), but because of a ramshackle little structure out back. Cusack recalls, “When I looked through and saw a crumbling shed, I instantly knew: There was my future studio. No one else wanted the house because of that building — but for me, it was perfect.”

Cusack, who sometimes shares clients with her mother, also works as a personal organizer for a select handful, relentlessly clearing interiors of detritus that is detrimental to inspiration, and forfeiting all clutter. Nowhere but here in her own domicile is Cusack’s gift for stripping bare the nonessentials most evident. This home is a perfect calling card for the beauty of less and loving what you have more.

Yet, this artist’s casa is not just a monument to austere minimalism. For within its pristine spaces, objects lovingly culled from places near, far and family, vibrate with power. “My sources for treasures,” the artist says, “are fleas, estate sales, travels, antique shops and City of Houston heavy trash days.”